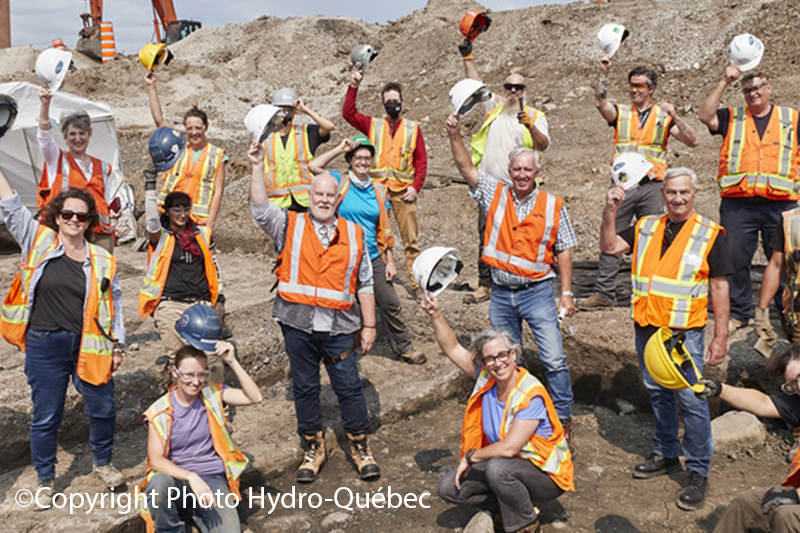 This excavation is taking place in the North end of the property. At the South and East section, construction of the Hydro station, to be called Poste des Irlandais (Irish station) has now started. But the area of this construction is generally “land fill”. In the 1950’s during the exaction for the Seaway; and then again in the 1960’s during the construction of the Metro-Subway, a great amount of earth was transported to the area and extended the property.

The archeologists using old maps and other indications are currently searching areas where there is a possibility of discovering some artifacts of the Fever Sheds. Of course, it would be impossible to search every square inch of this very large property.
So, it is our understanding that as any Hydro building construction is extended into possible older areas of the original site, careful attention will be done. If anything, important is seen at this point, all construction will cease and the archeologists that remain on stand-by during the entire future years of construction will return to the site.

The Montreal Irish Community could not possibly ask for more care and planning than that which is being done by the Hydro-Quebec organization.
The hope in the end is that all artifacts that are discovered by the archeologists will be cleaned-up, dated etc. and then displayed in any interpretation centre / museum that we plan to include in our world class memorial space around the Back Rock. 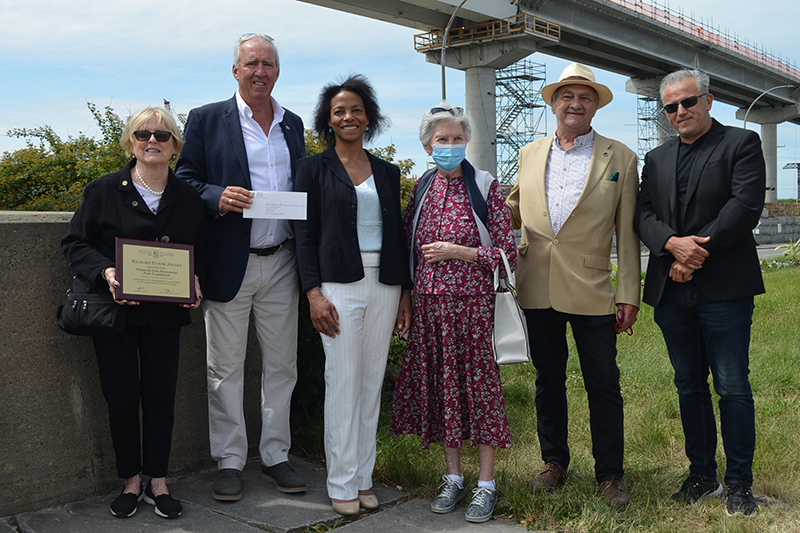 QAHN Award given to the Montreal Irish Monument Park Foundation

We were very pleased and honored to receive the Richard Evans heritage award from the Quebec Anglophone Heritage Network (QAHN). We would like to thank Global News Montreal for covering this event.

As an added bonus, representatives of The Pillars Trust Fund were also at the Black Rock and took the opportunity to present Scott Phelan (one of our Board Members; and Chair of the Fundraising & Finance Committee) with a very nice initial donation of $ 5,000. This donation, along with one recently received from Cine Gael, and a few smaller individual amounts donated via our web page are all helping us inch forward to our first objective of raising $ 1,000,000. This amount will represent our overall “Community Contribution” toward building the world class memorial park in the area. 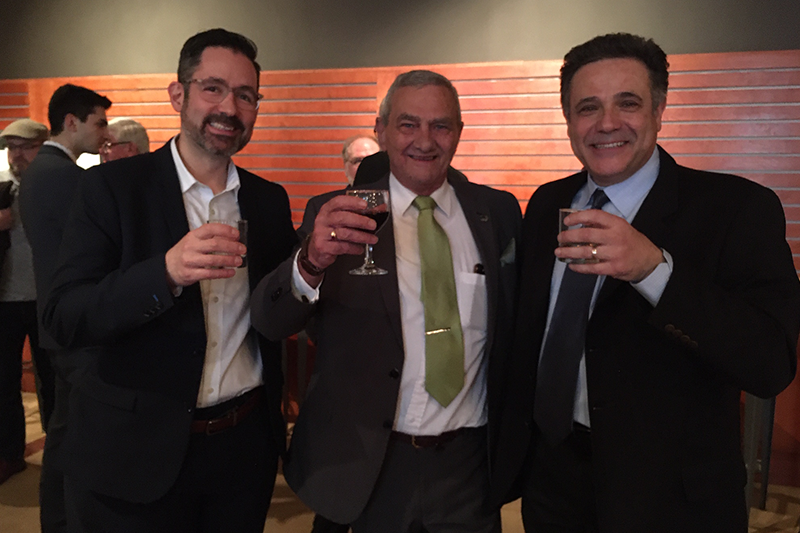 The Montreal Irish Monument Park Foundation gives a Plaque of thanks to the REM organization for all the care and respect they provided during their excavation that discovered the remains of 14 Irish victims from 1847. 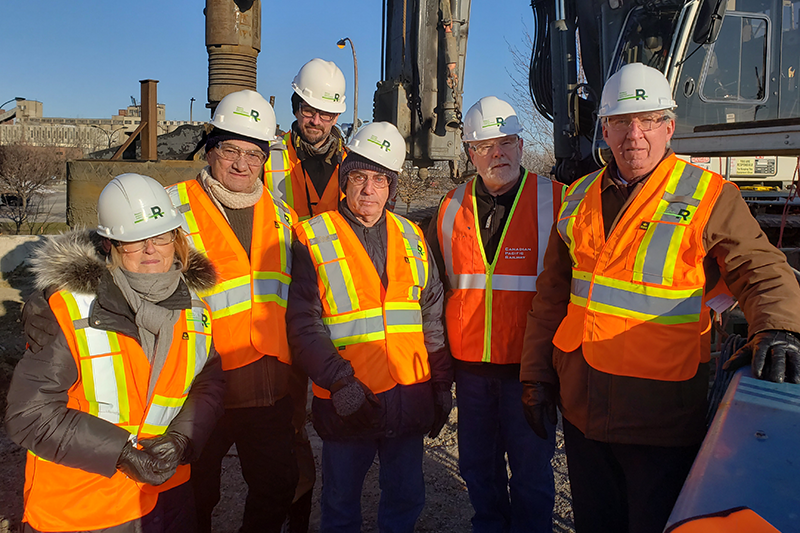 Representatives of the Montreal Irish Monument Park Foundation were invited to visit the site on the last day if the REM excavation where the remains of 14 victims from 1847 were discovered. 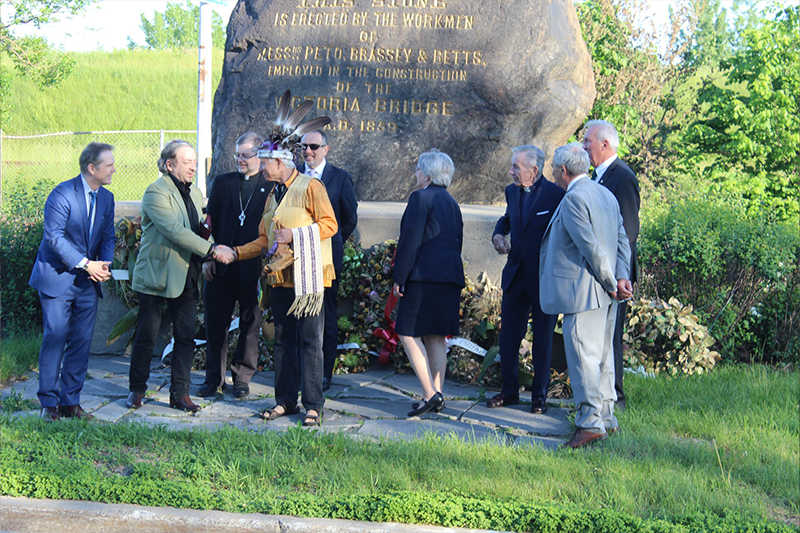 Ceremony at the Black Rock

Under a clear blue sky, a beautiful and moving ceremony took place last evening (Wednesday, June 12th 2019) at the Black Rock, senior religious representatives of the Catholic, Anglican, Jewish and First Nations performed a blessing of the area.
Montreal Catholic – Bishop Thomas Dowd; Anglican Bishop of Montreal – Mary Irwin-Gibson; Rabbi Alan W. Bright – (Shaare Zedek Congregation) and Ka’nahsóhon Kevin Deer – (Mohawk Traditional leader) – each, in turn, offered a blessing and remembrance of the 6000+ victims that died and were buried I n the area in 1847.
REM (the light transit rail organization) arranged to have some earth removed from the area where they will be installing their transit line and after the blessing; this earth was returned to the section. They also arranged for some banners to indicate the area where they will be digging.

His Excellency Jim Kelly, Irish Ambassador to Canada, was unable to attend due to a scheduling conflict but did send a written note highlighting the history of the site and congratulations on the progress toward a meaningful memorial space – Paul Loftus, a member of the 5 Irish Committee, read the letter.

Thanks to the tremendous efforts of the REM (Light Transit Rail) organization, (along with Hydro; and the City), in helping to prepare for this ceremony, everyone in attendance agreed that it demonstrated a great deal of respect for this sacred space. We certainly appreciate the attendance of these religious leaders as well as the members of the Montreal Irish Community that were able to be on hand for this great experience and of course the REM organization. 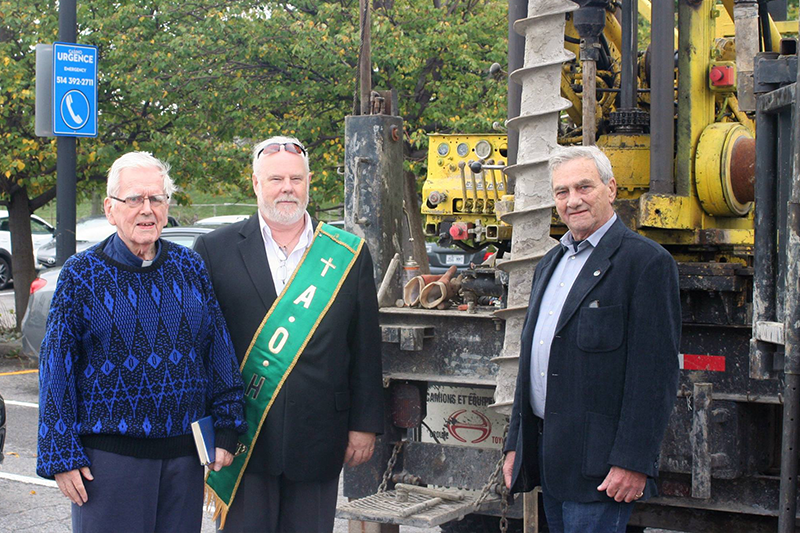 Blessing at the site of first archeology excavation

A Blessing at the site of the 1 st Hydro-Quebec Archeology excavation of the area with Father McCrory. 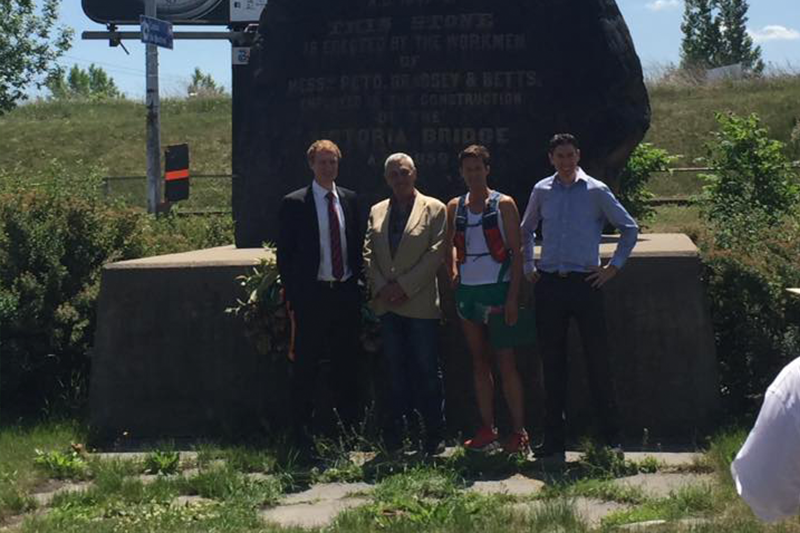 Michael Collins, a long-distance runner, and award-winning author
runs from Grosse Ile to Toronto to raise awareness of the tragic
events of Black 47, as well as, to raise some funds for various Irish
Monument efforts including our Montreal Irish Monument Park
Foundation efforts to build a beautiful cultural green space around
the Black Rock.
On Friday, June 17th 2016, Michael Collins arrived at noon at the
Black Rock to the cheers of members of the Montreal Irish
community, including representatives of the Montreal Irish Monument
Park Foundation; Danny Doyle, President, and members of the United
Irish Societies (UIS); as well as, Marc Miller, our Federal Member of
Parliament for the area.